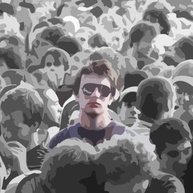 Full Transcript can be found here.

The role of the private sphere of life has been drastically eroded and diminished over the last twenty-five years, by the exploitation of network technology in the form of social media – and the public scrutiny of private life doesn’t stop with Twitter or Facebook. Everywhere, network connected devices are collecting data about your activities, your choices, your relationships, your habits, and your preferences. Doorbells, televisions, stereo systems, building security systems, and of course, computers and now the ubiquitous smartphone, all have microphones, cameras, GPS trackers, ‘call home’ beacons, and various other means of generating and vomiting data about you, to massive commercial institutions that are more than willing to hand that information over to political institutions, or even to openly publicize it for no other reason than to increase the potential for revenue generation. All digital ;records are fair game for exploitation. Emails, purchase receipts, government documents, video recordings, audio recordings, private chats, even files stored on local hard disks – if they’re connected to the internet, they’re “public” in some sense enough to skirt legal limits. If your mother notes your birthday on her Facebook page, your birthdate is public record. If your girlfriend breaks up with you and rants about it on Twitter, your relationship status is public record. If you add your friends to your snapchat address book, your friends contact information is public record. What’s more, if it’s public, the automatic assumption is that it is fodder for not just commercial, but political action. Celebrity is now an abundant commodity, diluted across the entire population of internet-connected citizens, whether it wants that status or not. If you have a phone number, you are as much a celebrity as Megan Markle. The only difference, is that not everyone has heard of you yet. Where does this leave the status of the sphere of the private? When the only barrier left between public and private, is mere ignorance of your presence in this new ubiquitous public sphere, can it really be said that there is a private sphere anymore?