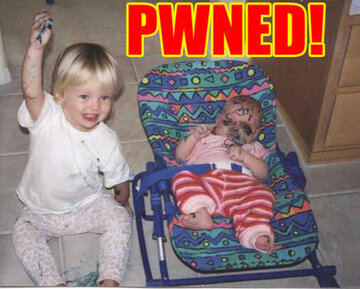 Everyone who studies undergraduate political philosophy already knows what Locke has to say in his Second Treatise on Government.

But in this age of “reaction” videos, roasts, and “pwnage”, I think the polemics in Locke’s FIRST treatise are way more entertaining! It is, hands down, the longest objection screed I’ve read of the Enlightenment thinkers, apart from the responses to Descartes' Meditations.

The opening paragraphs had me in stitches:

"…truly, I should have taken sir Robert Filmer’s Patriarcha, as any other treatise, which would persuade all men that they are slaves, and ought to be so, for such another exercise of wit as was his who writ the encomium of Nero; rather than for a serious discourse, meant in earnest: had not the gravity of the title and epistle, the picture in the front of the book, and the applause that followed it, required me to believe that the author and publisher were both in earnest. I therefore took it into my hands with all the expectation, and read it through with all the attention due to a treatise that made such a noise at its coming abroad; and cannot but confess myself mightily surprised, that in a book, which was to provide chains for all mankind, I should find nothing but a rope of sand; useful perhaps to such, whose skill and business it is to raise a dust, and would blind the people, the better to mislead them; but in truth not of any force to draw those into bondage who have their eyes open, and so much sense about them, as to consider, that chains are but an ill wearing, how much care soever hath been taken to file and polish them.

If any one think I take too much liberty in speaking so freely of a man, who is the great champion of absolute power, and the idol of those who worship it; I beseech him to make this small allowance for once, to one, who, even after the reading of sir Robert’s book, cannot but think himself, as the laws allow him, a freeman: and I know no fault it is to do so, unless any one, better skilled in the fate of it than I, should have it revealed to him, that this treatise, which has lain dormant so long, was, when it appeared in the world, to carry, by strength of its arguments, all liberty out of it; and that, from thenceforth, our author’s short model was to be the pattern in the mount, and the perfect standard of politics for the future…"

SIR ROBERT FILMER: YOU HAVE BEEN PWNED.